On May 23rd, Detective John Ellis will officially come aboard at Grand Blanc High School as a second School Resource Officer (SRO). The City of Grand Blanc Police Department has been working with the district to add an officer to the high school campus for quite a while. “Grand Blanc Schools is happy to expand our partnership with the City of Grand Blanc Police Department to staff our two large high school campuses more efficiently. This vision has been in the works for some time and it’s exciting to see this come to fruition as we prepare for the 2022-2023 school year,” said Dr. Trevor Alward, Superintendent at Grand Blanc. 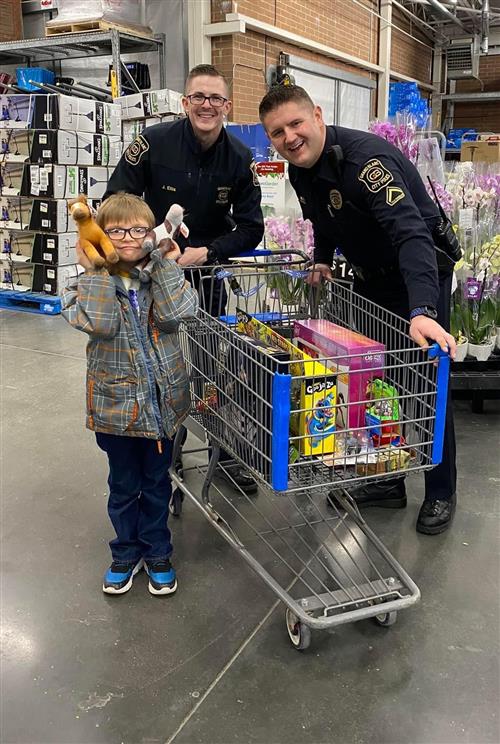 (Detective John Ellis, new GBHS SRO is the officer on the left in the above photograph.)

Detective Ryan Rouse, currently the only SRO at GBHS, welcomes the additional support. “I am excited about having the additional resource for the district so we can continue to uphold the tradition of excellence and a positive rapport between the school and Grand Blanc City Police,” said Rouse. With the support of fellow Grand Blanc City Police Officers, Rouse also watches over Indian Hill Elementary, Brendel Elementary, the Perry Center, and Holy Family Catholic School, all of which are in the City of Grand Blanc. Other GBCS school buildings are in the Township of Grand Blanc, with SROs from the Grand Blanc Township Police Department assigned; one to East Middle School and its feeder elementary buildings and one to West Middle School and its feeder elementary buildings. District administration felt the number of students within the city warranted assigning another SRO.

Detective Ellis graduated from Powers Catholic High School and went on to Saginaw Valley State University where he received a bachelor’s degree in Criminal Justice with a minor in Athletic Coaching in 2016. Ellis worked for a year with the City of Flushing Police Dept. before being hired by the City of Grand Blanc in April of 2018. He was an assistant football coach at Powers Catholic High School for several seasons.

“I look forward to working with GBCS and Det./ SRO Rouse at GBHS to continue in our goal of excellence both in and out of the classroom. I am excited for this new chapter in my career and hope to have a positive impact on our students and staff. GO BOBCATS!”

The new SRO position will also work for Grand Blanc Community Schools for 12 months, whereas the current position Det. Rouse holds allows him to return to City of Grand Blanc police work during the summer months. Summer, in addition to summer school coverage, will include conducting security audits at all campuses, developing staff/parent/student training, and the fingerprinting/onboarding of new employees.

Brian Lipe, Chief of the City of Grand Blanc Police Department said, “We look forward to expanding our partnership with GBCS. The collaboration between the police department and district to place a second SRO demonstrates our common desire to create and maintain a safe learning environment each and every day.”